New commercial real estate reports indicate that Atlanta office rental rates are at 2004 levels. Scott Amoson, Director of Research for Colliers International in Atlanta, states that shows some stabilization, as the rate had been steadily declining. While the outlook for landlords still appears bleak, real estate experts are hopeful that job growth will pick up

and improve these rental rates. The average rental rate was $20.06 per square foot in metro-Atlanta last quarter, according to data from real estate services firm, Jones Lang LaSalle. Colliers reported a very small uptick to $19.22 per square foot. While real estate firms may include different data in determining the rates, these rates appear consistent based upon those noted in the Buckhead area. The overall vacancy rate in metro-Atlanta rose very slightly in the quarter to 22.5%, according to Jones Lang LaSalle, and to 18.3% according to Colliers; the average between these two rates is 20.4%. David Rubenstein and Bogue Miller of CresaPartners, echo other real estate pundits in determining that the minimal job growth stunts new development, which is essentially non-existent. Their report, although not terribly pessimistic, indicates that the Atlanta job market is not expected to fully recover for three (3) years. On a positive note, Rubenstein and Miller indicate that it remains a good time for tenants to renew leases or look for new space. Law firms, while engaging into space sharing arrangements in order to reduce costs, and avoid "dark space," are also deciding to relocate. The law firm of Thompson Hine LLP,for instance, decided to relocate from Central Perimeter in Midtown into Buckhead. With an abundance of empty office space, due to the prior new construction "boom years," options in current include either staying in current law space and sub-leasing or moving to a different location. Law firms are weighing these considerations and investigating the scope of landlord concessions. Vacant law office space is a burden for all those involved, and options in this market are available to tenants - move or sublease law space. 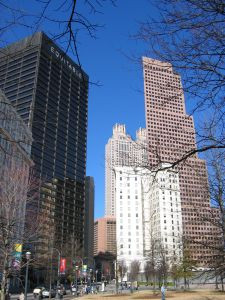 Sublease, sublease, and sublease. Atlanta attorneys are avoiding "dark space" and sharing office space with other attorneys. Subleasing law space means space that has been leased by a tenant and is being offered for lease back to the market by the tenant with lease obligation. "Dark space" is vacant space that is not currently occupied by a tenant, regardless of any lease obligation. Sharing law space is a great way to cut costs and Atlanta lawyers are seeking avenues on how to sublease law space or share empty office space with like-minded lawyers. Atlanta office vacancy showed little movement in the first quarter of 2011, thereby,

Atlanta lawyers are posting and listing empty office space on www.lawspacematch.com. These lawyers are attracting law school graduates who have not yet found a job in the legal field. The law school graduates are realizing that legal jobs are hard to find and starting their legal career as a solo practitioner is the best option. Sharing law space with seasoned lawyers gives these future lawyers a forum for networking with local attorneys and opportunities for legal work which they otherwise would have no access.

The mission of www.lawspacematch.com is to assist the legal profession by creating a web site targeted for attorneys in transition and law firms with empty office space. Immediate opportunities for attorneys desiring relocation may be found with criteria-based custom searches or views by zip codes. It's simple.  Law firms post available office space; attorneys search and find space while simultaneously posting their professional profiles on our site. www.LawSpaceMatch.com is a matching site like no other and benefits both the law firms and the attorneys by directly connecting these two parties.

Although hope remains the economy will eventually turn around, and lawyers will have an overabundance of legal work which will spur employment in the legal industry, access to the local legal community through www.lawspacematch.com is a source for networking with attorneys and seeking law space in a real estate market with a large holding pattern. Note taken from Atlanta Journal Constitution, on Friday, May 6, 2011 : Office space rebound still on hold

The video game industry is among the most expanding branch of the electronic business today, with customer bases ranging from the stereotypical adolescent teen to the parents of these teens. Video gamers are becoming increasingly more interconnected through networks such as Xbox Live, and the Playstation Network. On these networks, gamers not only compete against each other, but can do many things not related to games, such as stream their instant queue from Netflix, download music using Rhapsody, and even update their Twitter and Facebook. With these developments, consumers have put increasingly more personal information onto these networks in order to reap their benefits. One would think that a major industry giant such as Sony would be able to keep this information under padlock and key, but recent developments have shown that this may not be the case. In the month of April, hackers officially deemed by Sony as "anonymous" hacked into an estimated 100 million user accounts on the Playstation Network, obtaining street addresses, phone numbers, full names, and other personal information. Thankfully, most credit information was locked in a different network and was not reached, but the hackers still reached about 12,700 non-U.S. credit and debit accounts. Sony has stated that many of these numbers are outdated, but the company is still moving to notify affected customers "as quickly as possible". This situation is incredibly disconcerting, and presents many possible legal ramifications against Sony. One has to wonder how much precaution Sony put into locking this personal information, given that the conglomerate is one of the largest electronic companies in the world. Through this, the question of negligence pops up. In the coming months, the true ramifications of this hack will be seen, as the information stolen from Sony will undoubtedly be sold off and subsequently used by its buyers. A possible use for this information is to assist in stealing people's identities, a crime that may have been assisted by Sony's lack of precaution in safely storing their customer's personal information. So, a rational thought for a customer finding his/her identity to be stolen after knowingly giving personal information to Sony may be to sue the computer giant for customer negligence. This presents a larger issue for Sony and its legal team, an opportunity for some lawyers, and exposes a problem that may have even more far-reaching ramifications. Cloud Networking is an ever-growing method for businesses to store their information and contacts over the Internet. The Sony debacle has exposed these networks to be vulnerable, and has caused people to think that they have possibly put too much faith in corporate clouds. As a result, companies such as Safesforce.com, network software engineering company, have seen dips in stock prices, which had previously been among the highest performing stocks in the past year. Thus, the hack of Sony's Playstation network may be seen to have much more far-reaching ramifications than one would initially think, both legally and business-wise. As the situation shows, no network is impervious to hackers, representing an up and coming issue as our society moves into a state fueled by and reliant upon technology and networking.

The unemployed in Atlanta may have finally breathed a small sigh of relief upon seeing the city's March unemployment figures this week. With little variation over the last 12 months, the unemployment rate for Atlanta has been hovering between 9.7% and 10.4%. February's rate sat at 10.2% and the March figure posted a marked improvement at 9.8 %. Metro Atlanta, as one of the country's largest metropolitan areas, continues to be hard hit by the recession with more than 260,000 unemployed. In February this year, Atlanta was the only metro area among the nation's top 12 metropolitan regions to show a year over year net loss of jobs.

With a real estate market that continues to decline and an increase in gas and food prices, this week's unemployment report provided a bit of good news that Atlanta really needs. The improvement translates to 8,600 jobs that were added last month, many within the hospitality, leisure and health care fields. While much of this hiring is temporary, as hotels and restaurants start to staff up for the summer season, some permanent tech jobs were added. In fact, the need for computer network designers increased by over 11% over last year and wireless telecom jobs grew by over 7%. While these statistics are encouraging, despite posting improved earnings figures, some of Atlanta's larger corporations like Coca-Cola and UPS have yet to make any hiring announcements. Atlanta's residential and commercial real estate values also lag behind the national average. Home prices in the metro area fell by 5.8% between February 2010 and 2011. Together with Detroit, Las Vegas and Cleveland, Atlanta's home values are still below 2000 levels. Overbuilding in the construction industry at the beginning of the recession hurt Atlanta more than most cities around the country. The glut in commercial real estate was made worse by job losses in the financial and legal sectors.

Workforce reductions at larger institutions in these sectors created less income for property owners and caused many commercial buildings to go into foreclosure. Many institutions closed their doors, but the companies that did survive found ways to augment declining revenue. Atlanta's legal firms that survived the initial economic downturn, for example, found ways to fill vacant office space after headcount reductions.