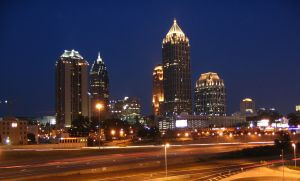 The amount of available office space in Atlanta over the past five years has increased by nearly 6%. As other cities in the country braced for the recession, Atlanta's lenders and developers ignored the warning signs and remained optimistic about the technology sector. Thinking that technology would continue to grow, many lenders eased up on financing terms, which caused some real estate developers to enter into risky projects. The resulting construction boom added an additional 3.6 million square feet of commercial space to the Atlanta market between 2008 and 2010. Even in the city's most affluent areas, the commercial real estate market historically has only been able to absorb between 200,000 and 300,000 square feet of additional space per year.

Further complicating the commercial real estate market, the unemployment rate in the city had hit 10% by the fourth quarter of 2010. Companies were downsizing the workforce and the space needed to operate. While analysts agree that a dramatic improvement in Atlanta's employment rate could help remedy the situation, forecasts suggest that a return to pre-recession employment may only occur after 2014. But even a return to pre-recession employment may not help much since the city's vacancy rate was already on the rise before the recession hit. As a result, employment figures would have to rebound well beyond pre-recession figures to positively impact the commercial market. As supply outstrips demand, landlords desperate to attract tenants are offering space at a significant discount. Rents are so depressed that it may take until 2016 for revenue to rebound. In the meantime, with less income generated, developers and landlords are hard pressed to meet their financial obligations. The result is an increase in the number of distressed properties, and ultimately, foreclosures. As of mid-2010, Atlanta led the country in seizures of real estate backed by securitized loans.

For a city used to leading the nation in relocations fueled by a growing economy, the cruel reverse of fortune is taking its toll. Between June 2009 and June 2010, Atlanta led the nation with the highest percent of real estate transactions involving distressed properties - 46 percent. In 2010, Elaine M. Russell created www.LawSpaceMatch.com, a service that matches lawyers seeking to sublet space with unoccupied office space at compatible law firms around the country. Elaine is a corporate and business attorney representing clients throughout Georgia. Elaine's office is located in the Buckhead section of Atlanta. Notes: Taken from: http://www.bloomberg.com/news/2010-09-14/atlanta-awash-in-empty-offices-struggles-to-recover-from-building-binge.html